People say history repeats itself. And there is no better example of that than the wars that have afflicted God’s people over many centuries. 722 BC: the power of the Assyrian empire; 587 BC: the mighty Babylonians; AD 70 and AD 132: the unstoppable Roman legions. God allowed them all to overthrow His people’s cities and take the inhabitants into captivity when they dismissed Him from their lives. Yet God’s people continually failed to learn the lesson, and it was never long after each reestablishment that they again turned from Him and the cycle repeated.
This repetitive cycle of going away from God and suffering as a result started even before the Assyrians—right from the early pages of Genesis.
And all foretold centuries before.

The First Turning Away: The Flood

Genesis 6 tells of a time when almost all of humanity had dismissed God from their lives. We’re told that “the wickedness of man was great” and “all their plans were only evil continually (Genesis 6:5). The saddest-ever words follow: God “regretted having created mankind” (6:6).
The result was God’s decision to start again, to wipe everything away and restart with Noah and his family, the only eight people left on the whole earth who had not turned their backs on Him (6:8). What followed was the now-famous account of how Noah’s ark saved that one family ready to start afresh.
An important point to note is that God told Noah what would happen in advance, and he in turn warned those who lived around him (2 Peter 2:5 describes him as a “preacher of righteousness”). For about 100 years Noah told them what was coming, yet they ignored him, and the flood eventually swept them away.

The Second Turning Away: Babel

Sadly, the cycle starts to repeat not long after this fresh start. The new population soon grew proud, preferring to trust in their own cleverness and abilities rather than give God a place in their lives. They planned to work together to construct an enormous monument to humanity, but God’s response was to hinder them by “confounding their language” (Genesis 11:7), forcing them into different ethnic groups, and then scattering them around the world.

The Downfall of Sodom and Gomorrah

Again, though, one man stood out from the rest as faithful: a man called Abram. Many of the others, however, continued to ignore God’s code of conduct, and the cities of Sodom, Gomorrah and their neighbours soon became notorious for their wickedness. Once more, God steps in. He sends an angel to investigate their behaviour (Genesis 18:21) but also instructs him to let Abram know what is about to happen. Abram’s nephew, Lot, lived there, and Abram pleads for God to be merciful. After much bargaining, he secures an agreement that the cities will be spared if they had ten inhabitants who could be considered righteous (Genesis 18:32). Abram had calculated that Lot and his extended family would constitute ten people; surely he had saved the cities.
Yet next morning, Abram looked out to see the whole area was a burning ruin, although in God’s kindness, the angels had taken Lot, his wife, and their two daughters out of the city beforehand.
Once again, this was a major destructive event spoken of before it occurred.

This repeating cycle of people turning the backs on God and suffering as a result is clearly seen in what happened to the descendants of Abram’s grandson Jacob, who became the people of Israel. God made some wonderful promises to them (Genesis 28:13-14), but also warned them that if they kept turning their backs on Him, He would bring enemy nations against them who would carry them into captivity, make them a proverb, and take away all their possessions (Deuteronomy 28 :32-36). This has repeatedly happened through the centuries.
722 BC saw the forces of the Assyrian empire overthrow many of the cities of Jacob’s descendants and carry away their inhabitants. 587 BC witnessed the remainder crushed by the might of the Babylonian armies and their capital city of Jerusalem destroyed.
When the people of Israel were released from their captivity in Babylon and returned home, they started well but soon began to turn from God yet again, eventually reaching the point when they even killed His son!
This time it was the power of the Roman armies that God used as punishment for the way they had once again turned their back on Him and His teachings. Deuteronomy 28:48-51 had foretold they would be subject to “a yoke of Iron” and would fall to a nation “as swift as an eagle”, and so it was: in AD 68-70, the Roman legions marched under the banner of the eagle and captured Jerusalem. Deuteronomy 28:51-52 had prophesied that “a nation of severe countenance... shall besiege you at all your gates until your high and fortified walls... come down... until you are destroyed”. AD 132 subsequently saw the Roman legions raze Israel’s capital to the ground.
The fulfilment of these prophecies has continued in more recent years with the Russian persecutions (the Pogroms) of 1821—1905, the Nazi persecutions in Germany between 1933 and 1940, the holocaust itself between 1940 and 1945, and more recently the general wave of anti-Semitism that has swept Europe since 2008, especially in France and Germany.
During the Second World War, the Jewish people did indeed “lose everything” as Deuteronomy 28 had foretold, when Nazis rounded them up and marched them off in preparation for transportation to labour camps and gas chambers; photographic evidence tells the poignant story. As was prophesied in Deuteronomy 28:65-66, “You shall find no rest, nor shall the sole of your foot have a resting place... your life shall hang in doubt.”

A Glimpse of the Future

God’s words have always proved true in the past and will prove true in the future also. The New Testament looks back at some of these events and holds them up as examples of what will happen one last time. This is particularly true of the annihilation of Noah’s day and the destruction of Sodom and Gomorrah. For example, in Peter’s New Testament letter, he describes the inhabitants of Sodom and Gomorrah as “an example for those who would afterward live ungodly” (2 Peter 2 :5-9). So there’s a warning there for subsequent generations.
Jesus, too, spoke of their destruction, but it’s interesting to note that when he reflected on what had happened, he did not mention their wickedness but instead said this about the flood and Sodom:
And as it was in the days of Noah, so it will be also in the days of the Son of Man: "They ate, they drank, they married wives, they were given in marriage, until the day that Noah entered the ark, and the flood came and destroyed them all. Likewise as it was also in the days of Lot: they ate, they drank, they bought, they sold, they planted, they built; but on the day that Lot went out of Sodom it rained fire and brimstone from heaven and destroyed them all. Even so will it be in the day when the Son of Man is revealed. (Luke 17:26-30 NKJV)
Instead of emphasising their wickedness or their determination to walk contrary to God’s wishes, Jesus just points to the normal day-to-day activities they were wrapped up in. In Noah’s day, the people “ate and drank and married”, and in Lot’s time, the people in the area of Sodom “ate, drank, bought and sold, planted fields and built houses.” In other words, their final day dawned for them like every other, and God’s judgment took them totally by surprise because they would not listen. Noah had spent around 100 years warning those around him, but somehow they were still unprepared!
Jesus’ reason for recalling those terrible events was to warn us that something similar will happen once again, and the world that opposes God’s ways will find itself once more facing destruction it cannot escape and which will take it by surprise. Many people today consider that everything will continue as it always has (as the people of Noah’s day and the inhabitants of Sodom believed), but God’s warnings will prove true in the future as well, just as they did in the past.
The next judgement will be broader and will envelop all of humanity as it did in Noah’s day, not just Jacob’s descendants. Many Bible prophecies talk of a time when God will drastically intervene once more because of the way humanity still turns its back on Him.
Isaiah 34:2, 8 refer to “the year of recompenses” when “the indignation of the Lord is upon all nations and his furies upon their armies... he has delivered them to the slaughter.” Isaiah 30 :27 and v30 warn that “the name of the Lord comes... like an overflowing stream... to sift the nations with a sieve of vanity.” These and other prophecies talk of a time to come when God will cause all the world’s armies to clash in one final destructive event. It will be their unstoppable greed and prejudice that will drive them into this decisive battle, but they will fall at God’s hand. Isaiah 17:12-13 foretells a time when “nations will rush like the rushing of many waters, but God shall rebuke them.” The Hebrew word translated “rebuke” literally means “to disarray”, so this is describing how God will break up and scatter those armies. This will be a final overthrow of human rule, the time when God will break the cycle for good.
Later in Isaiah’s prophecy, we read of another important dimension to this event: he also describes it as “the year of the redeemed” (Isaiah 63:4) and introduces us to someone who will be “mighty to save” (Isaiah 63:1-3). So, although great destruction will occur in that fighting, a new start will afterwards emerge from the fires and bloodshed. This time, people will look to God and live the sort of lives He intended. As Isaiah prophesied “The Lord’s house shall be exalted and all nations shall flow to it saying, ‘Come, let us go up to the mountain of the Lord... and we will walk in his paths...’ and they shall learn war no more.” (Isaiah 2:2-4). The cycle will finally be broken.

A Call to Look Back and Consider 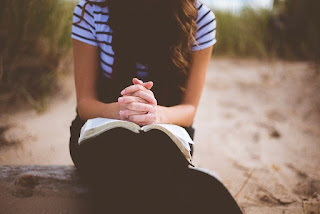 God’s word encourages us to consider the blessings that will come at that time. He describes the perfect quality of a new king who will eventually reign worldwide and change what happens over the face of the whole earth (Isaiah 11:1-5). For those who have not dismissed God from the lives, it will become a day of blessing because “the earth shall be full of the knowledge of God” at last (Isaiah 11:9).
Knowledge of what will come, though, isn’t enough in itself: we need to prepare now, and the way to do that is to show our obedience and allegiance to God by being baptised now, before the troubles start.
We look forward to the time when God’s original plan for the earth will finally be restored, and all humanity will at last live Godly lives.
Bible
Read More
Report abuse
Report abuse